Ads can be purchased by Members using Classified Ads 'Points'. We hope to enable Non-Members  'Wanted' adverts in future.

Members are given a 1000 points as a starter package.  The points you have can be checked by logging in and going to 'My Points' under the CLASSIFIEDS Menu.  This allocation last a long time so is pretty much a one time only request.

(In the unlikely event of you using up all your points, more can be requested via webmaster@saabclub.co.uk.)

The allocation of points to new members is, unfortunately, a manual process so new members may find they don't immediately have points.  In this case then please contact webmaster@saabclub.co.uk stating your membership number, to request your points package.

Members can create adverts by logging in and then using the menus under 'Classifieds Menu' on the right. 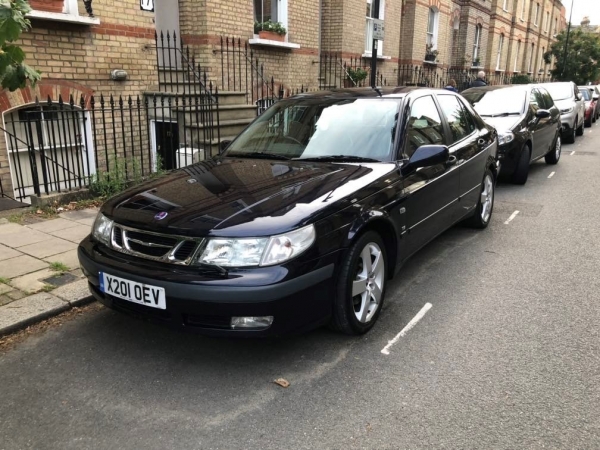 This SE model was supplied by North City Saab in Chigwell in late-2000 and has the original dealer plates. My assumption is that the original owner sought to spec this SE model to Griffin-level, by adding the sunroof, rear parking sensors, automatic dimming rear view mirror and the wood effect -trimmed steering wheel. The steering wheel currently fitted is the perforated leather version from a later model, but the original steering wheel is being sold with the car, together a spare coil pack. The car is also fitted with a stainless steel BSR exhaust system with twin exhausts.

The car is currently fitted with 17 inch Aero-model alloys all with Continental Conti-sport 3 tyres, which are fine but not new. The original 16 inch alloys are also being sold with the car (see pic), but only one of the tyres fitted to those wheels is new. The car has a temporary spare with all of the original tools and the protective wheel bag, none of which have been used. All of the interior electrics work without fault, including all of the interior and curb lights and the rear parking sensors. The seats are manually adjustable.

The car has been fully detailed this year, including a full clay bar, with all carpets shampooed, leather cleaned and treated and all rubber seals and hinges serviced. The car has had a full service this year, which included new brakes pads on all four wheels, together with a digital wheel alignment and new balancers fitted to each of the Aero alloys, new cabin filter, new blend doors and stepper motor fitted to the climate control system and new boot struts. The car had a further oil and filter change about 500 miles ago together with a new turbo bypass valve and control module, and the current coil pack was fitted about 1000 miles ago. Parts have all been sourced from Orio UK (with the exception of the blend door arms, which are the metal replacements as opposed to the plastic originals).

The bodywork is in very good condition with no corrosion. There are a couple of impact marks to the rear bumper and some scratches to the rear nearside door.

The car drives very nicely and is surprisingly quick. I drove it to the South of France this year and it is a very comfortable (and reasonably efficient) long distance cruiser. I am reluctantly selling the car because TfL has decided that it is not compliant with ULEZ, and I live in central London.